As the technical artist in a small indie team, I’ve been involved in the game Elsinore since 2014. My contributions have included: 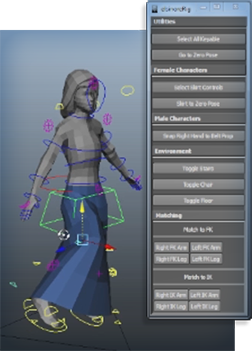 A set of six Maya rigs I made in 2015. Notable features include no-flip knees, automated shoulders, automated hips, 2-handed prop support, two-way IK/FK matching, and an automated skirt for the female characters.

All automation can be tweaked manually and blended off. Because characters in Elsinore are small on-screen, the faces are not rigged. The rigs were designed with game performance in mind.

Most of the animations were made on one rig and retargeted to the rest of the characters. 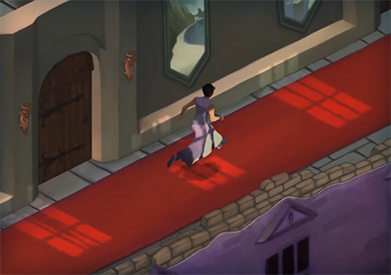 We wanted our game to have a hand-painted feel while still giving us the flexibility of 3D.  We opted for an “isometric” camera perspective, which allowed us to fully model the environmnet and paint over it by projecting the UVs into camera space.

As a key part of getting the hand-painted look, I designed a set of custom lighting surface shaders.  By sampling whether a pixel was in light or shadow, the shaders interpolated between a “light” and a “dark” version of the same paintover, giving us complete freedom in designing how our shadows looked.  By designing the lighting in these paintovers very deliberately, we were able to have shadows blend in and out.

I gave many of the dynamic environment shadows a painterly look by modeling invisible alpha planes around the edges of the geometry.